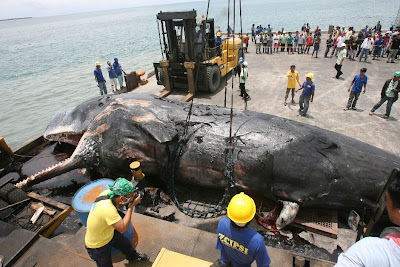 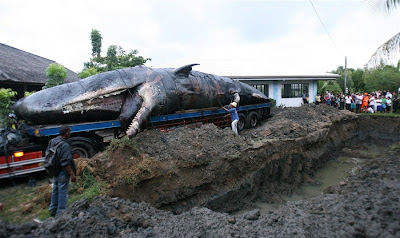 Local experts said it appeared that the whale had been dead only a few days; however, the many photographs of the whale indicated that it might have been dead much longer.

Deafwhale members checked to waters upstream for 3,000 miles looking for any seismic disturbances that might have injured this whale.  The only possible natural catastrophe we found was a potent thrusting earthquake that occurred only 115 miles from where the whales was first spotted. Very unusual.  We have never before found evidence that an earthquake killed a whale outright... but we have always felt it was possible.

It is our opinion that this whale directly above the epicenter of a whale-dangerous (thrusting) magnitude 5.8 quake that occurred in the Moro Gulf on 3 September 2012 at 6.610N; 123.875S.  The epicenter was along the edge of a deep drop off, 11 miles offshore on Kalamansig, Mindanao, not far from Catabato. Watch this video.....

The Moro Gulf is part of Celebes Sea and is surrounded by the Zamboanga Peninsula and the central part of Mindanao. Zamboanga City is the most important port city on its coast. The Moro Gulf is also an area of significant tectonic activity with several fault zones in the region capable of producing major earthquakes and destructive local tsunamis, such as the devastating 1976 Moro Gulf  quake which killed over 5,000 people and left over 90,000 people homeless as it hit the coast of Mindanao. Here's the way we see the death of this sperm whale:  She was chasing giant squid just above the seafloor when the quake suddenly erupted without warning. The changing water pressure (compressions and dilation) knocked the wind out of her and did fatal damage in an around the air pockets of her head.  The pressure waves might have also ruptured her heart.  She died almost instantly and sank to the bottom.  Bottom currents in the Moro Gulf rolled her carcass slowly ( at ~10 miles per day) across the seafloor toward Zamboanga.  The increased pressure at the deep bottom prevented decomposing gases from forming, and the cold water slowed decomposition giving the experts at the scene the impression she had died recently. Upwelling currents washed her carcass into shallow water near Sacol Island sometime around 14 September. As soon as the pressure was reduced on the carcass, it started to decompose and gases began to form. After 3-4 days in shallow water, and under much reduced pressure, the carcass pop up from the shallow bottom and was discovered by the Philippine authorities.      Sperm whales are deep water animals (due to its food, the giant squid) and are considered oceanic.  However, we find deep waters close to some islands in the Philippines where sperm whales come in close to shore.  Sperm whales have been reported regularly around the Bohol sea, Mindoro and the Moro Gulf.

The surface currents across the Moro Gulf would have washed the dead whale into the near shore waters near Sacol Island, so the sinking to the bottom is not necessary to support the SEAQUAKE SOLUTION to why whales strand themselves.