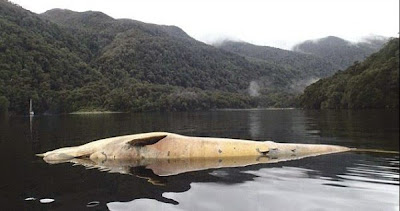 The was a 5.1 magnitude shallow-focused earthquake that occurred on 13 March 2015 not far from where the whales were found USGS report. On 24 March 2015, there was a more dangerous, vertical thrusting 5.2 magnitude quake ~1,000 km offshore that might have also been responsible (link).

Surface currents from this offshore quakes would have guided injured whales into the area where the carcasses were found.

To make matters even more confusing, the fisherman in the area might be using dynamite to kill whales that they believe are eating their fish. But blast injuries from explosives are much different that barotrauma from low-frequency seismic sea waves.

This quake was especially dangerous because the water is very shallow in these backwater canals. For example, if the depth had been 3000 meters and the whales on the surface, the seismic pressure waves would have spread out and weakened before reaching the surface. By the time the shocks reached the whales, they would likely have weakened to point where any injuries would be minor. On the other hand, in water only 10 meters deep, the whales would get hit with a much stronger shocks.

Another determining factor is the distance between the hypocenter (focus) and the rock-water interface. The quake's depth of focus below the water's surface is always defaulted to 10 km. On the other hand, the depth of focus might have been only 5 km below the surface. We have no way to know for sure. If the focal point was indeed only 5 km deep, weakening due to spreading would have been reduced by ~50%. In other words, the danger from a quake 5 km deep is twice what it is from a quake hypo-centered at the default value of 10 km.

Nor do we know the direction of the motion along the fault at the focal point. If this had been a vertical thrusting event, rather than a horizontal thrusting event, the shocks traveling to the surface would have been maybe 5 times more dangerous to the whales. This is so because water will not transfer shearing (side to side) motion. This is similar to rowing your boat with the oars turned sideways. My suspicious is that this was indeed a vertical thrusting quake since it occurred in a subduction zone known for such motion.

The great number of quakes you see in the chart below occurred over many years. The recent quake, marked with a large red star, was the event that killed the sei whales. Earthquakes rarely occurred in this area so this quake must have come as a total surprise to these animals, who likely considered this area as an earthquake safe zone.

By the way, I should mention here that all whalebone calving areas around the world are free of whale-dangerous earthquakes. It appears that the whales have been aware of the seismic danger they face for many millions of years. 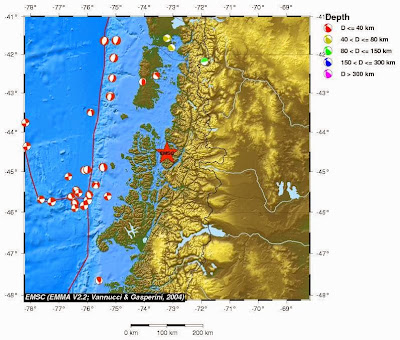 The decaying mammals were grouped together and laid out along a grass-and-rock shoreline. None of them showed signs of external injury, which would be consistent with internal barotrauma induced by shock waves from the nearby seabed upheaval.

The whales apparently survived for several weeks before they died. They were discovered, some beached and some floating in a tight group, about 250 km north of the Gulf of Penas. They measured about 10 meters (33 feet) long. The cold water area in southern Chile in which the whales were found in a partially closed by rugged fjords surrounded by green forests. The exact location of the epicenter can vary as much as 10 km is all direction, depending on the seismic agency reporting the event.

The cold would have slowed the decomposition somewhat.

A small Chile navy base is located several km north of where the whales were discovered.

The whales likely moved into this secluded, protective area to escape rough offshore seas that are common here in March.

These is not the first time a group of whalebone whales killed outright by an undersea earthquake. It happens quite frequently but whale scientists can't seem to sort out why. Or should I say they don't want to sort it out because the injury involves sinus barotrauma, the same injury caused by explosives, navy sonar, and oil industry airguns.

The US Navy and NOAA want to keep you in the dark about how barotrauma kills marine mammals.

The whale-loving public has been deceived for many decades by the US Navy, NOAA, the oil industry, and the unscrupulous whale scientists that get paid to keep quiet about the deception. It reminds me of the days when the tobacco industry were paying doctors to endorse cigarettes.